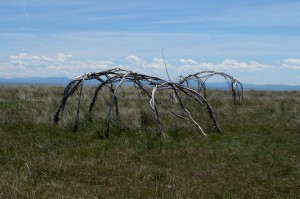 Back from a week in beautiful Montana! Imagine the great Rockies as far as the eye could see, horses roaming acres of fields, eagles soaring, clear winding rivers, wind farms, prairie dogs, sapphire mines, First Peoples Buffalo Jump….which is where the photo was taken.

The literature from the First Peoples Buffalo Jump (Ulm Pishkun) State Park describes: For more than 1,000 years, prehistoric men and women of the Great Plains hunted bison by driving them over cliffs. Ulm Pishkun, is possibly the largest buffalo jump in the world, was used as a jump site between 900 and 1500 A.D. Below the cliffs that stretch more than a mile, the soil reveals compacted bison bones nearly 13 feet deep.

Consider this: “The buffalo was part of us, his flesh and blood being absorbed by us until it became our own flesh and blood. Our clothing, our tipis, everything we needed for life came from the buffalo’s body. It was hard to say where the animal ended and the man began.”
John Lame Deer (Sioux) 1972